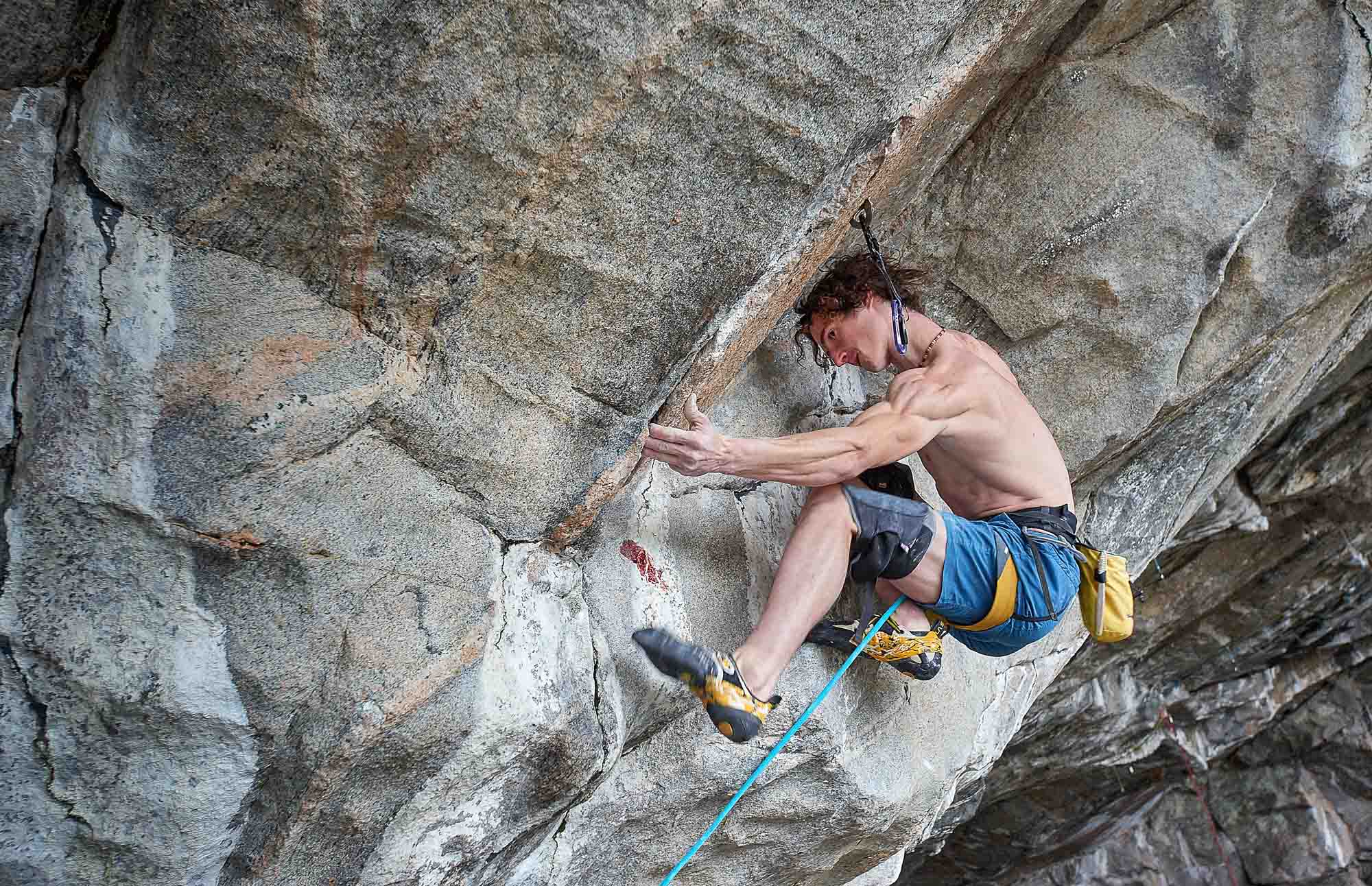 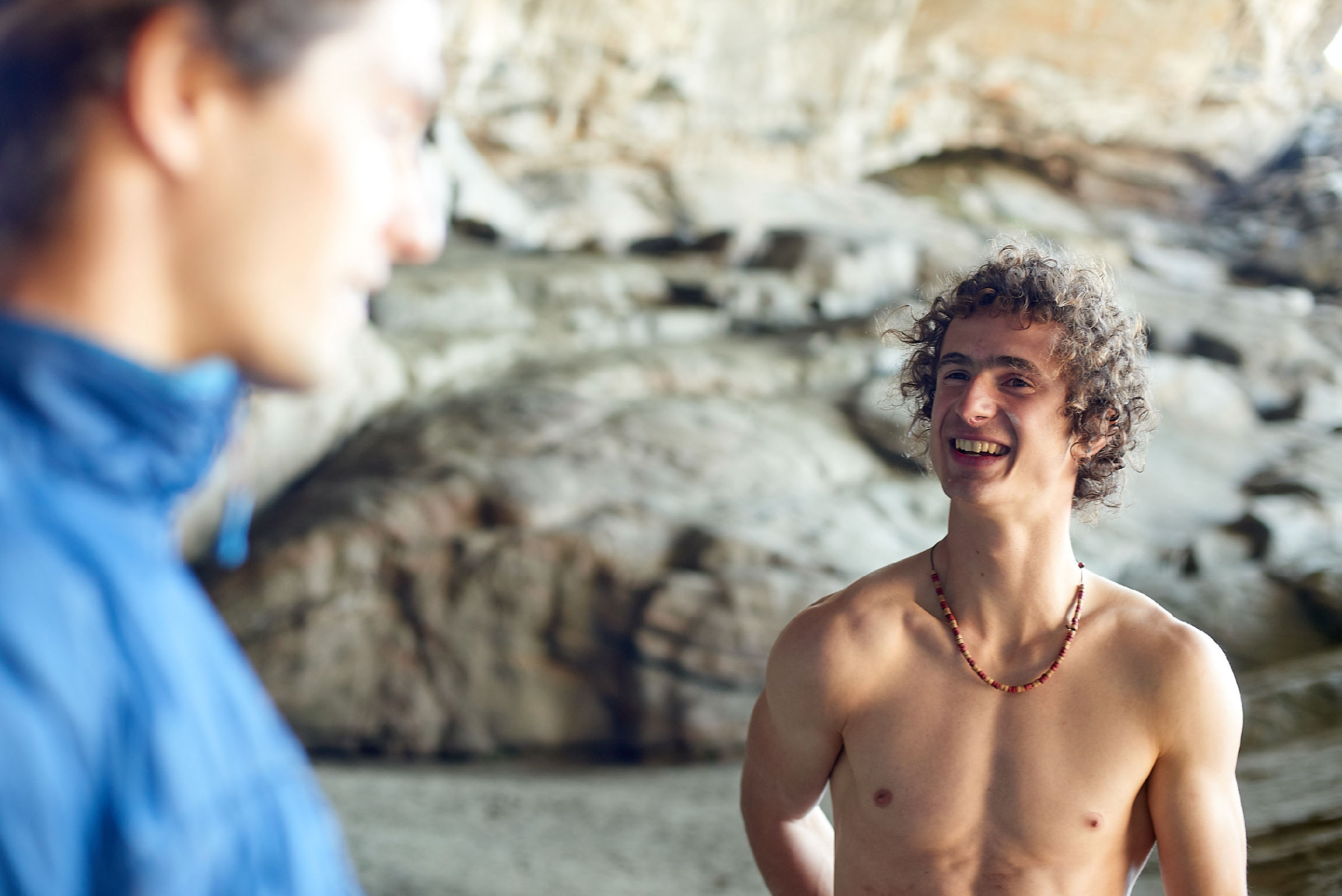 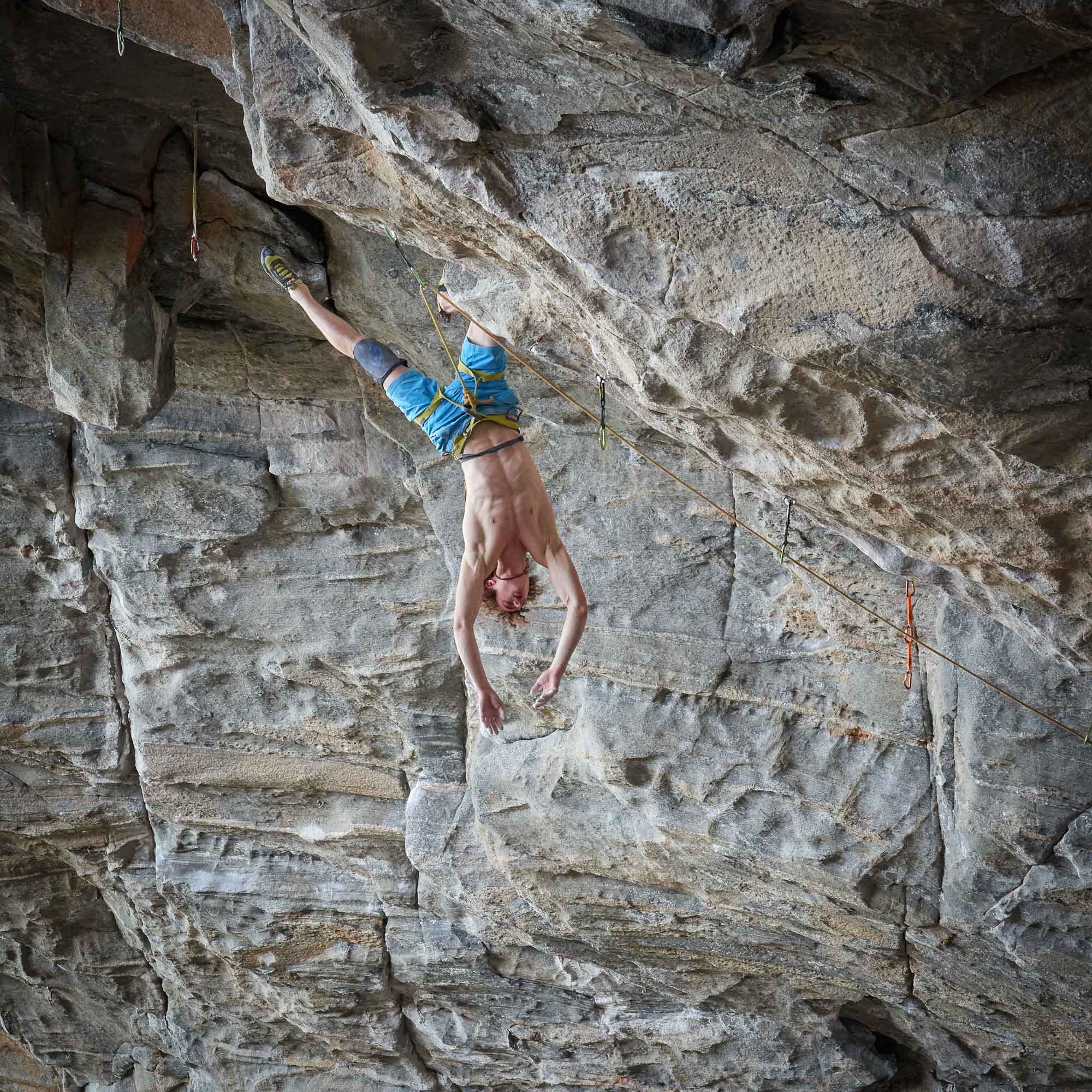 He did it! There was a deafening silence today in Flatanger’s cave in Norway and for a moment nobody knew, what’s happening. We already know it and we’re really happy. Read the world’s first interview about the first 9c.

DO NOT USE THE KNEE!

You’ve probably heard this before “Do not climb with your knee”, is the usual advice for beginners. Well, Adam showed us, that in possibly the most difficult sport route in the World, which he sent yesterday, the knee is pretty important. Otherwise it would be an endurance 10a route.

It all started yesterday, when Adam uploaded a short video on his Instagram account. He’s smiling and saying “I’m just really, really happy” in it. That’s all he said, and the imagination of viewers was great, the best comment probably was: “Is it a girl or a boy?”

Well, it’s a boy: “Project Hard” 9c. How was the birth then? What about the child-birth?

“Nobody expected that it would be so quick. It was just a second serious try. There even weren’t many people in the cave and the whole cave was in deafening silence. The most interesting thing was, that once Adam sent it, nothing happened, nothing at all. Everybody was so confused. Such a strong moment,” – Adam’s climbing partner Pavel Blažek told us.

Adam was in Arco till last Sunday, on Monday he just repacked, flew back to Trondheim and back to Flatanger.  He hasn’t even settled yet and it’s done. He sent the overhanging route “Project Hard” at the very second serious try. “What just happened? Did he do it?” This kind of mood was at the base of the wall. Everyone just stared up, left in shock. Adam did scream few times during the climbing, but at the very top of the route… silence. It’s too early to celebrate, those experiences have to somehow sink in first.

One of the people under the route was Michal Běhounek:
“From the ground it looks possible, but in  reality? Nooo way! Not a chance. It’s mega hard, even Adam says it’s mega hard.”

Sebastian Bouin, who is trying Adam’s route “Move” 9b in the cave, was also watching the final try as well:
“It was something amazing. I don’t think Adam is the strongest climber ever, if it goes down to muscles, but his style of movement is amazing. He climbs so precisely and sharp. The best thing about him is his determination for his projects and ability to spend so much time on his routes.”

I STARTED TO CRY AS HE COMPLETED THE FIRST CRUX

How does Adam’s ascent feel for Iva Vejmolová, his girlfriend and belayer?

“Today was the warmest day since we got here. I know how Adam reacts to weather – normally he would become annoyed for it. But he perceives it differently right now, so he acted as if it didn’t matter. Today we went to the rocks earlier and most importantly the project was dry.

The shooting was done by our cameraman Bernardo, and as soon as we got to the base he told Adam: “I feel, you’re gonna send it today” Bernardo, was there at Adam’s every important project (“Dura Dura” 9b+, “Chaxiraxi” 9b, autor’s note), so basicaly he is like his talisman.

Yet Adam told me that he wasn’t feeling as fresh as he felt yesterday. His legs were hurting from the knee rests and his body was hurting too. He felt 25percent chance yesterday and today he felt only 15percent chance. Even so, he was pretty positive at the base and he wasn’t nervous at all. That was great, and personally I think it was the key thing. He also climbed far more quickly than in the first serious attempt from the ground. Everything was just fine.

I felt he wasn’t as confident as yesterday, perhaps because of the weather and fatigue, on the other hand it was obvious that he was psyched and less nervous than in 9b+ routes. When he climbed into the first and the most difficult crux, he did it so easily, we were all speachless. Like “What the heck?”

In this moment I personally started to cry. (laughing) I knew that if he didn’t screw up, then he was going to send it. For me, It was so difficult, to wait and see what’s going to happen next. He was in the following knee rest for a very long time, obviously he didn’t want to go to the next boulder. Then he just went for it and fought it, but at the very top there was no celebration and everybody was just confused. Has he done it or not? I wasn’t able to speak too… such a strange moment. Perhaps it was so hard, that he couldn’t even scream. It was more like a big relief. It was beautiful.” 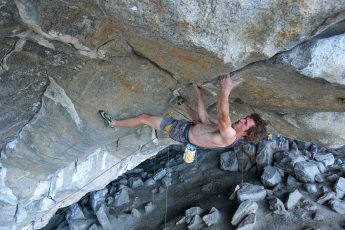 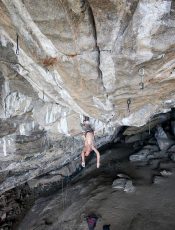 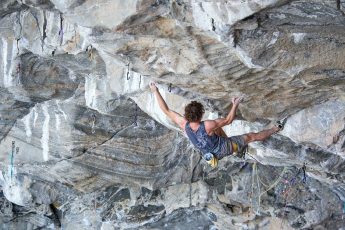 How did you feel about this moment?
It’s probably the weirdest route I’ve ever climbed, which applies to ascents as well. It was ridiculous, but still, that doesn’t mean it felt easy, it didn’t. In fact It was incredibly intense.

What was it then, were you touched or exhausted at the top?
I would say both. (laughing) It was so different from how I had imagined it. I thought that as soon as I get to those last five good holds under the very top, I would start to celebrate, I would be releived, feeling great. It wasn’t like this, I was still totally concentrated, I was so scared that I was gonna loose it in that 6C boulder, which was the last thing between me and the top. In fact I was so concentrated, that even when I finally clipped the top I was still under pressure. Full of happiness and relief, but everything was inside me. (laughing) The only visible thing were tears in my eyes, that’s all. I was just hanging on the rope, unable to do anything else.

I heard, that you sent it thanks to the cameraman. (laughing)
Not really, I was more like angry about him, because I wasn’t feeling very lucky today, I was giving it less chances than yesterday. Bernardo said something like “you’re going to send it today” and I went “Come on, don’t press me into it.” (laughing again). In the same time, this mixture of feelings and emotions, that I’m probably not gonna do it had some positive effect on me in the hardest crux. I did it quite easily and then I just didn’t let go.

How many degrees were today?
It was quite warm, about 16-17°C. I would vote for cooler weather, but I wasn’t sweating or heating until the end of the first crux. Those other boulders are not so conditions dependent.

“I knew I can fall anytime in this knee rest, on the other hand I knew I’m not gonna do the next part without this few seconds of rest.”

In what physical state you were compared to your last try two weeks before?
It depends a lot how my body and legs feel – mainly the calves. Since you hang in knee rests a lot – Altogether this route has six different knee rests, and you’re hanging upside down – that’s why my yesterday’s try was so exhausting for my calves. My physiotherapist Klaus (Isel, autor’s note) massaged them before my go, that was a piece of puzzle which helped me a lot. Still I couldn’t be in those knee rests as long as yesterday.

What about the crux?
I don’t think I was stronger than yesterday, but I did it on 100 percent and precisely. Maybe a bit slower too… What is so weird about this route is the fact, that every single try is unique, there are plenty of factors involved. You never fit your fingers in this crack the same way, the same goes for your feet. And position of your body affects all those following key moves. The lucky part of my today’s try was that I did those five moves as precisely as I could. Because of this I got to the end of the crux kinda fresh and I could finish it. Almost calmly actually. That is a part of the grading too. This route is so psycho. In one single moment everything has to be perfect. Conditions, strength, clear head. Everything just so you can climb relaxed, because you know, you can’t climb it without risk. That’s impossible. I went to a maximum risk in many moves. I knew I can fall anytime in this knee rest, on the other hand I knew I’m not gonna do the next part without this few seconds of rest.

Last last trip ended up with you being ill. What happened after this?
I think, I wasn’t able to send it on the last trip. I feel a lot better now and perhaps the illness was good in some way – I could rest, I started proper training and I could try the moves once more… When I left back home I had perfectly planned three, four weeks training with Patxi (Usobiaga, autor’s note). I gave up on endurance and focused on boulder strength only. Campus board and interval boulders. I feel far stronger than ever before. I realized that endurance has almost no effect on this project, because there are so many no hand rests. It’s a kinda fitness route, one has to be fit to send it – climb plenty problems on boulder with short rest pauses. That’s exactly what you need. You certainly don’t need to climb 40 moves in a row. There are no more than 15 moves in a row without a knee rest.

Who would you recommend this route to? (laughing)
Well, it’s a route that pleases people who love obscure moves. (laughing)

Is it good to have a long shinbone?
Hmmmm. You can compensate that with an ankle. There are so many knee rests that I can’t tell if my length is ideal. I realized on this project that if you have a strong calf and you’re able to hang upside down in a knee rest, you don’t really need a “core” strength, because the only muscle you need is a calf muscle, the rest of your body just hangs in the air.

Do you even know how to climb normal routes – without kneebars, after this? (laughing)
Well, of course I’m pretty excited to climb on crimps for example. (laughing) I trained mainly rounds, underclings and cracks… and I improved a lot in kneebars for sure. (laughing)

Adam Ondra – always with a smile on his face (f: Pavel Blažek) 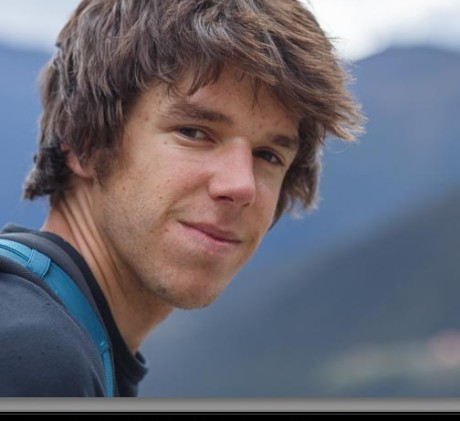 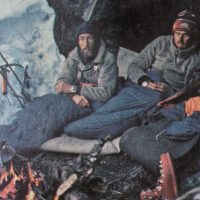 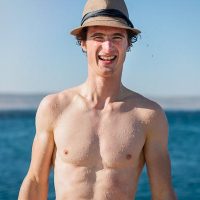 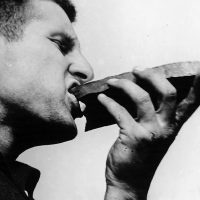 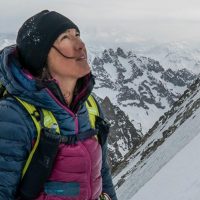 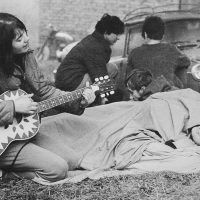 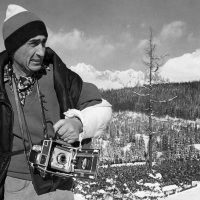 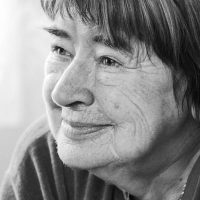